Once upon a time (July 2012), a young princess (technology princess?) went outside the comforts of her castle (home) and set out for an adventure in a far way land (California).

During this adventure (ISTE Conference), in the far way land, she met many merchants (vendors) giving samples of their wares (free stuff). Not accustomed to such giving, she accepted excitedly. She gathered blouses (t-shirts), musical instruments (noisy squeaker things), quills (pencils/pens) and even a rare animal (frog toy).

Oh, how she relished her new found treasures (piled them on her suitcase).

Then at the end of a very long day of lessons (conference sessions), a few of her new acquaintances ask  for the gift of her presence at (everyone decided to go to) the beach. Oh, how the princess had longed for seeing this beach! For you see, there are not any beaches near the castle (Kansas).

A quick carriage ride (8 block walk or more) back to the guest accommodations (hotel), the princess quickly shed herself of her day dress (nice clothing) and rummaged through her belongings for something more comfortable.

What does one wear to the beach besides the swim clothes (swimsuit)? Maybe she would don one of her new blouses from the merchants...but which of the six? None of them seemed just right, but rushed for time she grabbed a white blouse and knickers (capris) and headed back out for her carriage ride back to meet up with friends.

Upon her arrival at the destination, she found herself a smidgen under dressed for this beach....
(see below and ignore the guy in the picture...more on him later in another story). 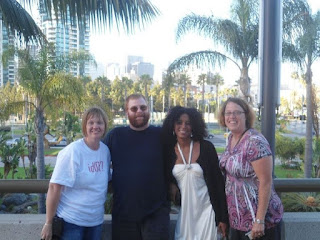 Little did the princess know that everyone else donned their formal wear! The call of the beach beaconed them still, so off they rode in private car (taxi).


The beach came within sight and all was forgotten. The beauty, the smell, and the sounds filled her senses. 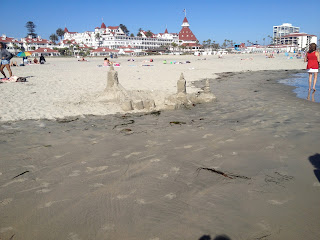 This was the perfect ending, or so she thought, to this grand adventure. However, little did she know that the shirt she had chosen so hastily....had this little word for all to have read....

Her dear prince would point out upon her return, that her shirt had read "idiot?". I am sure that the backside had brought more meaning, but it had been covered by her backpack. So this poor little princess walked all around that eve with the shirt from the merchants that begged the question "idiot?"