Six months ago (plus a little) -- in October 2019, I was in NYC at the Google Innovator Academy. SIX MONTHS ago.

Now I could talk about how different the world is now, but for the focus of today's blog I'll keep the focus on the academy itself.

The academy. I honestly can't keep from smiling when I mention it. Wearing my shirts associated with the academy make me feel connected, stronger, and able to do more. My team and cohort are an amazing source of resources, innovation, strength, and smiles.

Part of the academy and Google Innovator process is the innovator project. You can visit the past reflections in this blog to give you more of a background.

However, here we are at the six month checkin for our Innovator journeys! 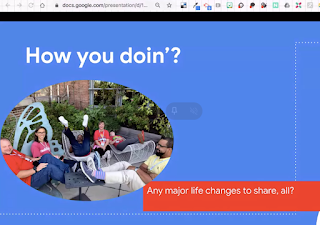 And actually, this was slotted to have been last month. However, do to COVID-19 we have been given some extensions.

So the 6/7 month checkin was completed last week on the 22nd of April.

Those who wanted were able to share about where their projects are and how much reach they have had with them. It was hard for me..
I had planned to have a working pilot ready for April 8th, but it had to be put on pause. It was still good to reconnect and celebrate with those that did share/attend.

After the shut down of school buildings this year, I've been left wondering what that would mean for my project. Could I pilot before next fall and if so, how far would that put me behind in my plans. However, recently there have been some questions about sharing information and finding those with knowledge and skills within our district. It became the right time to mention my project again.

Now let me interject some additional and needed background for you....
In February, I attended METC Conference in Missouri. I have several connections with those attending. One just happened to be Amanda Moody a fellow #NYC19 Innovator. As Amanda and I were catching up and comparing projects, I mentioned the main issue of a database with my project. She said that she had someone I should meet...that was at the conference as well. Amanda connected me with Adam Geisen (be sure to check out his work www.tamingthetech.com).

Now back to April. Adam has...through potentially the busiest time...continued his promise to help me bring my project to life. He has created an amazing platform for me to pilot. Here are a couple preview pictures of it....

I am so excited! I can't put into words what it is like to see a idea come to life in this way!!

So the demo and trial are on! I've requested a few try it out and make suggestions. And I can't wait to see where it goes from there. You win -- I win and we make learning less isolated!

October 20, 2012
As I think of a title for this post I am not sure whether to title it "venting", "criticalness", or what. I will start by saying that I just came back from a two day conference. A conference that was...different than the normal. It was streamed in from a location somewhere else and we watched from our seats in this big room. To be honest I think many of us came into the conference with a complaining attitude. This was new and not what we "wanted". Honestly I was very critical at times with the surroundings, with the comfort, and with some of the speakers. One speaker didn't present the information in a way that was interesting to me or the information that I had hoped for. Then came today. I shared a presentation with SimpleK12 about organizing my library. I thought I had good information that some beginners (like me) could benefit from. The backchannel feedback was very discouraging. Some were very critical of a librarian without training both se
Read more

I smiled as I wrote this title, "Stretch and Grow" because it makes me think of my mom (and really her mom as well). It is what they would say as little ones in the family would stretch their little bodies. I can picture it and hear it now, "stretch and grow". However, as I wrote the title today, I wasn't thinking of "little ones".....I was thinking about myself. Last post I shared some of my "leading role" goals and the challenge for excellence in what I do. I'm personally challenging myself to practice, learn new, and just grow in my craft. In effort to challenge you and myself as well, I am sharing how I am currently "stretching" myself. Professionally: 1. Participation in a Massive Open Online Course for Educators called Coaching Digital Learning: Cultivation a Culture of Change This course starts today! If you are interesting in participating check it out....we are just getting started. 2. Following this last su
Read more